Cats and Dogs – Can’t They All Just Get Along? 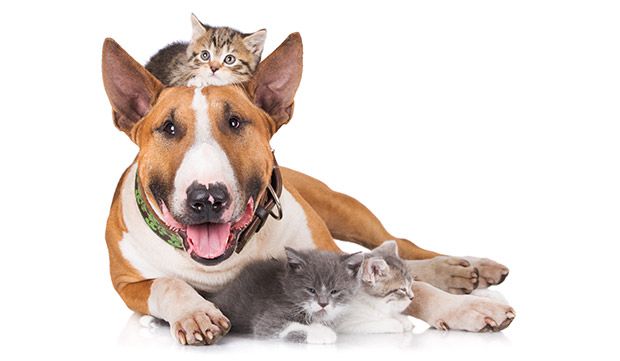 Everyone has heard the saying ‘fight like cats and dogs’, but the real question is can’t they all just get along? Cats and dogs are very different from one another, and this is perhaps one of the main reasons why they don’t tend to get along very often.

First, you need to gain a better understanding of cats and dogs separately before you are able to even begin to fathom them being able to get along. Some cats and dogs are just naturally nice to one another, and typically this is when they are raised together.

Cats started being domesticated around 3500 BC, based on archaeologists and Egyptologists. Cats would be domesticated to help keep away the rodents and other pests that would taunt the ancient Egyptian civilizations. Cats were then tolerated because they helped to keep these pests away.

Over the years, companionships formed and now cats are part of many people’s families and everyday lives.

Dogs are very social beings, and this probably has a lot to do with why they started being domesticated. In ancient times, men would adopt wolves and wild dogs. They lived in the same types of habitats and they also shared similar prey as the people living in ancient civilizations. They built close ties, and this is something that will probably last forever.

There is a reason why they say that a dog is man’s best friend.

How Dogs and Cats Get Along

In recent years, more and more households are choosing to have multiple pets. In these instances, cats and dogs will usually get along better than they would in the wild. This is because they are more trusting of each other when they belong to the same family. They are able to learn each other’s quirks, and this helps them to acclimate to one another. According to the American Veterinary Medical Association, 44 percent of people in the United States that have pets have both dogs and cats living in their homes.

This is why it is so important to learn how they can get along, because no one wants to deal with the animals fighting like cats and dogs in the most literal sense!

The Biggest Problem Between Cats and Dogs

Perhaps the biggest problem that we see between cats and dogs is that dogs tend to chase cats. Most of the time the dogs do it for the fun of it, but the cat will probably feel threatened by their behavior and this is when it can get ugly. The best thing that you can do is teach your dog to not chase the cat. Chasing the cat should never be acceptable behavior. Just like you teach your dog to ‘leave it’ or ‘drop it’, you should also teach your dog to leave the cat alone.

Understanding the Uniqueness of Each Species

For this very reason, they are not always compatible. Sometimes the dog may appear to be too playful, and this may cause fear and anxiety in the cats. Cats that are fearful are often times aggressive as well, and this may make the dog feel threatened. Usually it isn’t because they just don’t like each other, but rather that they sense each other’s fear. The good news is that you can assess the situation and make adjustments to help them get along better.

The key is that dogs and cats speak a different language from one another, and they must take the time to learn the other language before they will start to actually get along with each other.

What to Do When First Introducing Cats and Dogs

When you introduce a new animal into the home, you must do it with caution. This is especially true if they are two different species, like a cat and a dog.

When you introduce them, it is best to do it slowly. You really never know how either of them will react, especially if they have never seen the other species before. Most of the time, if they are still babies they will just be playful if they aren’t afraid of the other pet. The problem is, sometimes your existing animal may not like this playfulness.

Sometimes, they may even have a little bit of hostility towards them because they are jealous.

When you first bring in a new pet, confine them to a single room for a little while. This will give them an opportunity to play and get used to the scents in the new home. Scent is one of the main ways that animals communicate with one another. Just letting them become familiar with scents can really help to make the transition a lot easier on everyone involved.

Control your introductions, and keep your dog on a leash until you know how they will react. You don’t want any sudden movements to initiate a full blown fight between the two, and this is something that can happen if you aren’t careful enough. 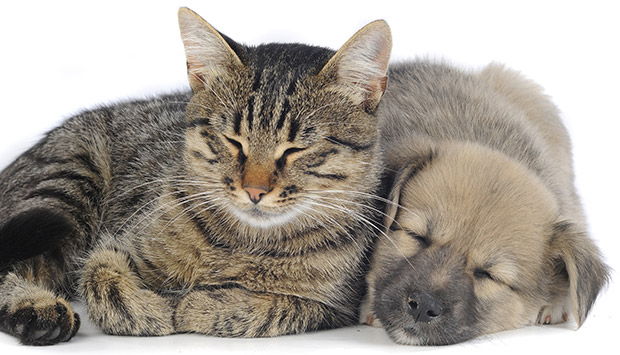 7 Tips for Helping Cats and Dogs Get Along

Now that you know a bit more about why cats and dogs don’t get along very well, it is time to take a look at a few tips that will help your cats and dogs to get along. Here are a few helpful tips to make your household a bit more peaceful:

1Prepare in advance for the arrival of your new pet.

Make sure that they have their own space that they can call theirs, so that territory issues are not as severe with the adjustment.

2Understand your dog’s background. When you adopt a dog from a local shelter, you will need to make sure that you are familiar with their background. Dogs that have a history of abuse, or a history of not getting along with cats, may continue on this same path.

If you already have a cat at home, it may be best for you to talk to the shelter about getting a dog that has experience around cats.

3Understand your cat’s background. Much like knowing a dog’s background, the cat’s background is equally important. If your cat comes from a home where dogs were in the picture, chances are they will be better able to adapt to your home and your dog.

Cats that have had traumatic experiences with dogs may never get along with another dog.

4Some breeds of dogs are better with cats than others. It may be a good idea for you to look into the breeds that are more social with cats. Dogs that like to chase, like terriers and hounds, may not be the best option. Any time a dog chases the cat, it probably isn’t going to turn out to be very pretty.

After all, your cat may just be running to flee because she is afraid, while the dog thinks that they want to play.

5Let your dog run off some of their excess energy before you introduce them to a cat. Dogs typically have a whole lot more energy than cats, who are known for their laziness.

If you let them run off some of this energy before you introduce them to the cat, chances are they won’t run around acting crazy and scare the cat.

6Keep an eye out for signs of hostility. Cats will often stand tall with their tails fluffed out when they feel threatened. Dogs will bark or growl. If you notice these signs, then it may be time to separate the two for a while.

Introduce them again when they are calmed down, and things may go better the next time around.

7If your dog and cat don’t get along right away, you might want to consider a pet behaviorist or trainer. You definitely don’t want to leave them alone in the house while you are away, because you never know what they will do when everyone is away. If they are really against each other, it could turn into an ugly fight.

It is best to be safe rather than sorry and just keep them in separate rooms until you return home.

Here are some more tips from Dr Katherine Miller of the ASPCA:

As you can see, it is possible for cats and dogs to get along. You just have to make sure that you take time to introduce them slowly and focus on the things that you can do to improve their relationship. If you have both dogs and cats, it is very important for you to focus on making them get along.

If your pets are still stubborn, it may be time to talk to your veterinarian. Some pets are just territorial and won’t budge when it comes to their space.