If your dog is currently suffering from diarrhea, it’s one condition that’s very easy to identify. A dog’s stools will be very loose and perhaps even liquid, and the dog will most likely go to the bathroom, or at least try, several times within just a few minutes. While diarrhea in dogs can be alarming, it’s not a disease but rather a temporary condition indicating a problem with the dog’s gastrointestinal tract (GIT).

In some cases, such as when the dog has eaten spoiled food, the diarrhea is a way of the body eliminating the source of the problem from the GIT. While a single incident of diarrhea doesn’t necessarily need medical attention, there can be warning signs that it’s due to something more serious and if it lasts too long, you’ll definitely need to get your dog some help.

Causes of Diarrhea in Dogs

From something as small as a bite of bad food to major issues such as cancer, there are many different causes of diarrhea in dogs. When your dog is dealing with the condition, it’s important to find the cause of it so you can try and stop it from happening again.

Dogs may suffer from diarrhea due to:

Younger dogs are more prone to things like infection and parasites that cause diarrhea, so these are often the first elements looked at when a pup is suffering from it. It’s also said that because German Shepherds have an insufficient exocrine in their pancreas, they’re also more prone to diarrhea than other breeds.

Symptoms of Diarrhea in Dogs

As stated, the most obvious and noticeable symptom of diarrhea will be stools that are very loose and possibly compromised entirely of liquid. However, there are other symptoms that your pet could also suffer from:

Treatment of Diarrhea in Dogs

Fortunately, if your dog experiences diarrhea, it will likely clear up on its own in a day or so, with no veterinary treatment necessary. But that doesn’t mean there’s nothing you can do to lessen their symptoms, or to get the diarrhea to stop altogether.

At the first sign of diarrhea, all food bowls should be put up and out of your dog’s reach. Solid food can exasperate a dog’s diarrhea and only make it worse while they’re trying to get better. Leave them off any kind of solid food for 12-24 hours, but do make sure that they have plenty of water so that they don’t become dehydrated.

Rice Water Fast
One of the best things to do is to put your dog on a rice water fast. This will give their intestinal tract some starch that will help firm up the stools, and can also help prevent your dog from becoming dehydrated during the bout of diarrhea.

To make the mixture just boil one cup of rice in four cups of water for about 30 minutes. Then just strain out the rice, reserving the milky-colored water and allow it to cool before giving it to your pet. This water can be given as often as needed, although it’s important to use only plain, white rice. Minute rice won’t have the same starch content, and brown rice could actually further damage the GII as it will speedily push things through the colon.

Just as probiotics can help humans with digestive issues, they can also help your dog. While yogurt is often a good source of these probiotics, it’s not recommended that you give it to your dog, especially while they’re dealing with diarrhea. Instead, visit a health food store that will have probiotics in powdered form, and then just sprinkle some into your dog’s food, or into their rice water if they’re fasting.

Once your dog can handle small amounts of food again, begin by giving them just some bland rice, and small amounts of chicken baby food, both for protein and flavor. Sprinkle some of the probiotics into the rice before giving it to your dog for further protection while they begin to eat solid food again. 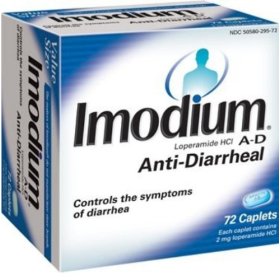 Some over-the-counter medications have been known to help stop diarrhea in dogs, namely Pepto-Bismol and Imodium. While these medications might be able to help your dog feel better and stop or slow their diarrhea, you should  never give  these medications to your dog without first checking with your vet.

Medications meant for humans can be very harmful to other animals, and you want to make sure that you’re helping your dog rather than making a bad situation worse.

Going to The Vet

Rice water and riding it out are typically enough to stop any dog’s diarrhea, but sometimes the problem is more serious than these remedies can tackle.

If your dog’s diarrhea doesn’t stop within 48 hours, if vomiting is present, and if you notice your pet is also losing weight rapidly (and often without explanation), it’s time to take them in to see the vet. 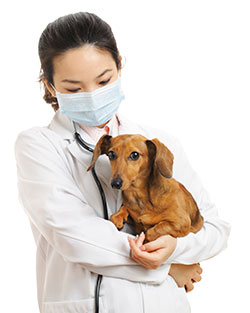 The vet will want to know everything that could be affecting or causing the diarrhea. This will include what the dog has eaten, how long the condition has been going on, and where the dog has been, to eliminate the possible that they’ve gotten into toxins or pathogens. One of the first things the vet will check for is signs of dehydration, as this is common in dogs suffering from diarrhea.

As well as a physical examine and a history of the condition, the vet will most likely also take several tests to determine the cause of the diarrhea. These could include blood tests, radiographs, ultrasounds, cultures, endoscopies, and biopsies. A stool sample will most likely also be collected so that the vet can have it tested for the presence of parasites that could be the underlying factor in the condition. The course of action that your vet takes for treatment will depend on the severity of the condition and how long it’s been going on.

After you’ve dealt with it once, you’ll be very eager to know how to prevent diarrhea from happening again.

Luckily, there are a few things you can do.

Diarrhea in dogs can be very frightening, especially if it comes on suddenly and is very aggressive in the first early hours of it. Keep calm and remind yourself that, when it does happen, it’s not usually anything too serious and will probably even go away on its own within 24 hours. Try to keep your dog as comfortable as possible during that time and if needed, take them to a vet after 48 hours for further treatment and to prevent any further damage from being done. Then, just take the few steps you can to make sure that diarrhea is never something that you or your dog will have to deal with again!