Everything You Wanted to Know About Police Dogs 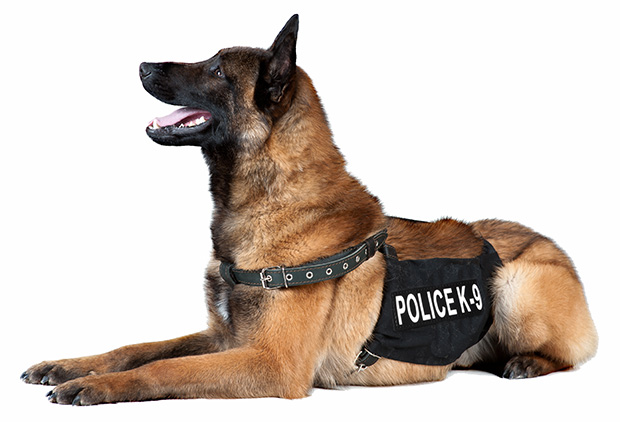 Police dogs do a lot in a day. They can track down criminals, find narcotics hidden by even the cleverest of criminals, search buildings, rescue individuals from dangerous situations and more; and they’re used in most major city police departments today. There are thousands of police dogs in service, and hundreds that have made the ultimate sacrifice – all in a day’s work. But how does a dog become a member of the force, and what dogs make for good police dogs? Here you’ll find everything you wanted to know about police dogs, including why they’re not only used, but so highly relied upon.

Why Police Dogs Are Used

While police dogs bring with them many benefits such as speed, agility, and companionship, these dogs on duty are mainly used for their sense of smell.

A dog’s sense of smell is nearly 50 times more sensitive than that of a human, and they can use this to find criminals, weapons, narcotics, and even bombs. Not only can police dogs often sniff these items out within seconds of walking into a room, it’s often safer to have a dog find these things than a human, who would have to manually search every nook and cranny of the area. That could ultimately lead to a much more dangerous situation.

A dog’s sense of smell isn’t just much more sensitive than that of a person’s, it’s also very discerning. If a police dog is given a certain scent to track, such as one found on a scrap of fabric found at a crime scene, they can search for that same scent while blocking out all others.

In addition to their nose, police dogs are also very effective simply because they bring with them a sense of fear and intimidation that police officers sometimes don’t. Criminals know that they cannot reason with a police dog, nor can they negotiate with them or try to sway them on their side of the story. Not to mention that a single growl from a German Shepherd – the breed of dog most often used in police work – is enough to invoke fear right down to the soles of even the most hardened criminals.

Police dogs don’t only just look and sound scary either, they actually are! Naturally much faster and stronger than police officers, police dogs are able to chase criminals or subdue them until an officer arrives. These dogs also have a fierce and firm jaw that can clamp around a criminal that’s trying to escape.

Police Dogs and Their Partners

For obvious reasons, not every dog is cut out to be a police dog. Small breeds are not suitable because they do not have the size or strength in order to perform all of the tasks that will be required of them. Typically German Shepherds are used but other suitable breeds are Labrador Retrievers and Belgian Malinois.

There are many different requirements police dogs must meet before they can work their first day on the job. Some of those are:

While dogs chosen to be police dogs are only the best of the best, they are only half of the K9 unit. The other half of course, is the human partner that will work with them day in and day out. For this reason, the human component of the unit also needs to be just as good and is very carefully considered. The qualities that this person must bring are:

Where These Working Dogs Come From

It used to be that police dogs would be donated by their former owners, especially in the cases of large litters of German shepherds. However, after decades of using these dogs, police departments are now finding that it’s much more effective to use police dogs that are specifically bred and trained from the time they’re young pups for work in the force.

It’s for this reason that they often turn to police dog agencies that focus on doing just that – training young pups for their eventual day as a police dog. When using dogs from one of these police dog agencies, police departments have the choice of using either American or European.

European-bred police dogs are thought to be the better of the two options, as breeding standards for police dogs in Europe are very strict, with a very specific number of physical attributes needed before a dog can be considered for police work training. If a dog does not meet these physical requirements, they will be relieved of their work before they have even begun. This is just one example of the strict standards held by the European agencies, but those standards have made them internationally renowned. Each dog that comes from a European agency has also been given international certification, basically guaranteeing the work they will do.

Under no circumstances are American agencies “bad” agencies to obtain police dogs from. They simply don’t have the certification that Europe does, and their standards are just slightly lower than those in Europe. However, American agencies do have the benefit of being much cheaper than their European counterparts. Even though it’s said that they’re sound investments, purchasing and shipping a single dog from Europe to North America costs approximately $8,500.

Every police dog will most likely work in a specialty area, whether it’s catching criminals, sniffing out narcotics, or working in bomb units. However, before they can embark on that journey, all police dogs must first undergo some basic training.

During the training a dog’s endurance and agility will also be tested, and they’ll be trained to get in the best physical shape possible. They will be expected to climb stairs, jump walls, run quickly, and perform other physically-gruelling tasks.

If they aren’t used to city life when they start basic training, they’ll become acclimated to it so that bustling crowds and large noises don’t stress them out or distract them once they’re on the job.

At the time a dog has completed their basic training, and only then, they will then move onto specialized training which will deal with the component of police work that best suits their skills.

Once police dogs have finished all of their training (both basic and specialized), they’ll be assigned a partner that they will not only work with, but live with. Police officers and their assigned dogs are together 7 days a week, 24 hours a day until the time the dog retires, at least. Their days will involve traveling alongside their partner no matter what the day’s work entails, whether it’s sweeping a school for drugs, patrolling the streets, answering calls, or just waiting between calls. And just like human officers, they put their lives at risk every time they are officially on the job, and sometimes even when they’re not. Police dogs have trained their entire lives for the job that they do, and not only are they exceptionally skilled and trained, they love doing it, too!