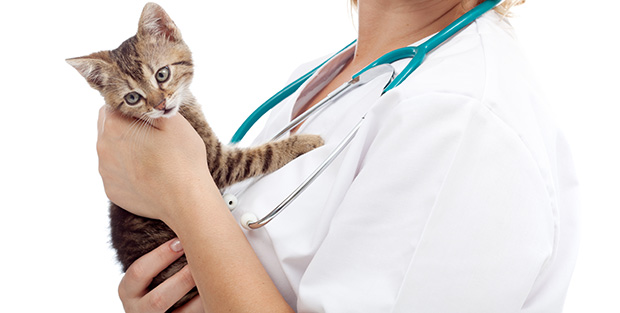 Giardia is a protozoan parasite that can be ingested by your cat and possibly, though not always, cause them to become sick. Giardia is an extremely common intestinal parasite also found in humans, but this is usually transmitted through well water. It’s unknown if cats can also pass giardia onto humans, so it’s best to always use caution around cats that may be carrying giardia. It’s also important to know that while giardia in cats may be present, it doesn’t cause illness until the infection giardiasis sets in.

Once the parasite has settled into the small intestine and started to multiply, it will form walls around itself and be shed through the feces in the form of cysts. When the feces is then ingested by other cats, they start carrying the giardia parasite and could possibly become sick. Some cats can carry the parasite for years without showing any symptoms, while others might never suffer from giardiasis at all.

This parasite is also waterborne, which makes this the leading cause of giardia transmission in cats. Giardia is a very stable and hearty parasite, preferring wet and moist environments.

Because giardia can be picked up through the feces of contaminated cats, and because the parasite can live for months in the harshest of conditions, cats that are in kennels and boarding shelters are highly susceptible to catching giardia. The overall incidence of giardia in cats in North America however, is only four percent.

Symptoms of Giardia in Cats

When the giardia is still in its first, swimming (or motile) stage, cats won’t show any signs or symptoms of illness. Cats can live for years without the giardia ever bothering them, but if the giardia moves into the second (cystic) stage, giardiasis develops and can cause many symptoms. Younger cats are more likely to show these symptoms than older cats, and they can be difficult to spot. They can be chronic or temporary, and they can also come on suddenly and show random patterns. The symptoms of giardiasis are also very similar to those of cancer and IBD, so it’s important to take your cat into the vet at the first sign of something wrong.

The most common symptoms of giardia are:

Some of these symptoms, particularly diarrhea in cats, can turn very serious so it’s important to take your cat into the vet at the first sign of any of them.

Diagnosing and Treating Giardia in Cats

Upon first examining your cat, your vet will likely want to rule out other possible causes of infection such as inflammatory bowel disease, malabsorption of nutrients, and improper digestion. If your cat is experiencing diarrhea, a common symptom of many different conditions and sicknesses, the vet will also want to rule out any of those before testing for giardia.

Once testing for giardia is to be done, the vet will collect a fecal sample and either test it in their office, or have it sent to the lab for further testing. During this test the sample will be smeared onto a slide and observed under a microscope. Doing so will allow the veterinarian to see the giardia, but because giardia isn’t present in every stool sample, this is a test that sometimes needs to be done multiple times.

To treat giardiasis, an antibiotic known as Flagyl is given. It’s taken orally and is a medication that can be given at home. Only in the most severe cases when giardiasis has caused the cat to become severely sick or weak cats are admitted into the hospital for more intensive treatment and monitoring.

Antibiotics are usually very effective at getting rid of giardiasis, but cats are more resistant to this medication than dogs are. Because of this, cats taking them will sometimes need a few courses of treatment before improvement is seen. Regardless of whether the antibiotics work right away or not, your vet will also likely want to continue receiving and analyzing stool samples for several weeks after treatment has begun. This will ensure that the cat is getting better, that there are fewer giardia in the stool, and that reinfection is not likely to occur. The cat will also need to be bathed and groomed regularly to keep the parasite and infection away and prevent the spread, especially if there are other cats in the near vicinity.

Giardia in cats isn’t a serious condition but if infection ensues, the symptoms could cause much bigger problems such as dehydration. Although giardiasis can be easily treated, prevention is still important to keep your cat healthy. Be scrupulous in the cleaning and disinfecting of your litter boxes; and make sure that whenever you’re boarding or kenneling your cat you only use facilities that have the highest health and safety standards, and that is impeccably clean throughout. Also be aware that your cat may still pick giardia up while there, so keep a close eye on them after you get them home and be on the watch for the first sign of symptoms.