Lymphoma in dogs is one of the most common cancers, accounting for 10% to 20% of all canine cancers. While there might be some breeds that are higher at risk for the disease, it can affect any dog.

Lymphoma, also called lymphosarcoma or non-Hodgkin’s, is a malignant cancer affecting the lymphoid system. This system is very important to a dog’s immune system to help protect them against certain viruses and bacteria. The lymph nodes (glands), liver, spleen, gastrointestinal tract, and skin are all different areas of the body where lymphoid tissue can be found. These locations are important because they help to classify the lymphoma, depending on where the affected tissue is in the body.

Causes of Lymphoma in Dogs

Although doctors and researchers know how lymphoma forms, a specific cause is still unknown. A recent study was published in a New York Times article, Lawn Herbicide Called Cancer Risk for Dogs, showed that certain pesticides seemed to increase the occurrence of lymphoma in dogs, but this is most likely one of several causes. It’s also been suggested that strong magnetic fields may also increase the likelihood of lymphoma, but even less research has been done to provide evidence that this is the case.

Due to the fact that certain breeds have higher prevalence of lymphoma, it’s thought that genetics may play a factor but still more research needs to be done into this possible cause. The breeds thought to be at highest risk for developing lymphoma are Rottweilers, Scottish terriers, and Golden Retriever. It’s important to understand however, that any dog – of any age or breed – can develop lymphoma.

Symptoms of Lymphoma in Dogs

The most obvious sign of lymphoma is swollen glands, which are the lymph nodes, typically seen and/or felt in their neck, in front of the shoulder, or behind the knee. Because there are some lymph nodes that cannot be seen or felt from the surface, such as those in the liver or bone marrow, there are other symptoms you can watch out for if you think your pet is sick.

The symptoms will vary from animal to animal, depending on the size of the tumor, the area of the lymphoma, and the stage of the disease.

Diagnosis of Lymphoma in Dogs

There will be several tests done when diagnosing lymphoma in dogs, but it will start with a physical examination by a vet so they can determine the area that’s being affected and what further tests will be required. Once the examination is complete, a complete blood count will be done as well as a platelet count, a biochemical profile, urinalysis, fine needle aspirate or surgical biopsy of the lymph node. 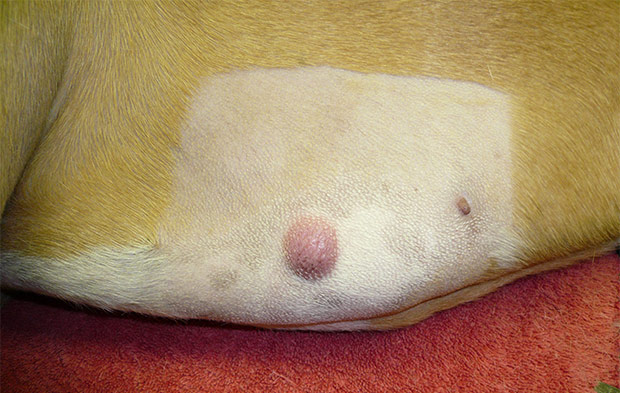 X-rays and ultrasounds may also be done, depending on the location of the tumor. Along with determining the stage of the lymphoma, and how severely it’s affecting the dog’s system, this testing will help determine if the dog is a suitable candidate for chemotherapy.

There are 5 stages of lymphoma:

Treatment of Lymphoma in Dogs

Because lymphoma can be so aggressive, chemotherapy is considered the best form of treatment. It’s given through a combination of oral and injectable drugs that are administered on a frequent basis. There are a number of chemotherapy options available including three to five different drugs that can be given. Each of these will work on different cancers in different ways so if one doesn’t work on the dog’s lymphoma, another can be tried.

The treatment for lymphoma can be extremely financially draining on a pet owner, and for some the cost is simply out of reach. Because of this, sometimes dog owners choose not to follow through with treatment. Sadly for these dogs, it’s expected that they will live for only another four to six weeks. Oral prednisone is often prescribed in these cases to reduce the swellings and the amount of discomfort the dog is in. If the dog is going to be receiving chemotherapy, prednisone is not recommended as it can reduce the effectiveness of treatment.

Life expectancy can be extended for dogs that are treated through chemotherapy. About 75% of dogs that undergo chemotherapy experience remission. While the first remission varies, depending on the dog, the disease, and the type of chemotherapy that was use, it’s expected that the cancer will go into remission about 6 to 11 months from the time chemotherapy is administered.

If the cancer comes back after the first remission, there is a chance for second remission with chemotherapy, although at 40%, those chances are lower than with the first one. From there the probability gets worse, with only 20% of dogs seeing a third remission. At some point, the tumors will become resistant to treatment and the prognosis is much sadder as treatment options are no longer a possibility.

While these statistics might be frightening for dog owners, it’s important to understand that most dogs do tolerate chemotherapy very well, and their quality of life will be greatly improved with proper treatment.

Lymphoma in dogs is an incredibly scary thing for any dog owner to face. Before you start panicking however, take your dog to the vet as soon as possible to start testing. The lymphoma might still be in the early stages and your dogs’ prognosis could be much better than you initially think when you hear “lymphoma”. Should your dog develop lymphoma, remember that it’s always up to you to determine whether or not you can or should proceed with treatment. Before making a final decision, make sure to speak with your vet about what their quality of life will be with and without treatment, as well as if they’re a good candidate for treatment (for some dogs, factors such as their age might rule out things such as chemotherapy.) Only then can you make an informed decision as to whether or not pursuing treatment is the right thing for you and your dog.