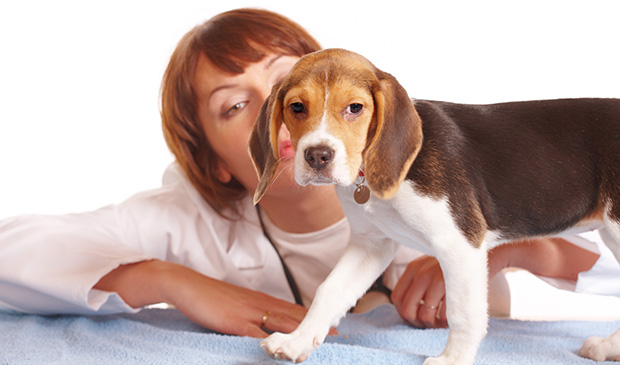 Osteosarcoma is an aggressive form of cancer that affects the bones. Typically, this type of tumor makes up around 5% of all tumors found in canines. More often than not, the limb that is affected by this cancer must be completely amputated, followed up by aggressive chemotherapy. Osteosarcoma in dogs typically has a high rate of malignancy, so it is important to have it treated right away.

Risk Factors of Osteosarcoma in Dogs

There are some dog breeds that have a predisposition to osteosarcoma. While it can affect all breeds of dogs, it is more often found in the larger breeds and giant breeds.

Here are a few of the breeds that are at a higher risk of developing this form of cancer:

If you have one of these breeds, or another large breed dog, it is important that you keep a close eye on their overall wellness. Other risk factors include age, gender, and whether or not they have been spayed or neutered. Generally, it is the older dogs that you see with this form of cancer. Males are twice as likely as females, and dogs that have been spayed or neutered seem to also be at a higher risk.

Signs and Symptoms of Osteosarcoma in Dogs

Most of the time, the symptoms that come along with osteosarcoma in dogs will be associated with the location of the tumor. The tumors usually grow on the extremities of the limbs, below the joints. This is because they are most often found in or near the growth plates. Bone swelling and inability to bear weight are two of the most common early signs. If you don’t catch it soon enough, however, it may lead to bone fracture. This is often the first sign that many people notice, especially in senior dogs that don’t get around well as it is.

Through x-ray technology, a veterinarian can take a look at the bone patterns and notice characteristics that may indicate that there is a tumor growing. If there is anything that seems out of the ordinary, they will do further tests to determine whether or not it is osteosarcoma. The problem is, in an overwhelming majority of patients, the cancer has already spread to the lungs by the time that it is diagnosed. This does not fare well for the prognosis.

Since the numbers are so overwhelming for metastasis, all dogs that have been diagnosed with osteosarcoma will be treated as if it has spread to the lungs. This is mainly because there is no sure way to tell without biopsying, and time is of the essence.

There are, however, a few other conditions that can mimic osteosarcoma. These include fungal infections of the bone. For this reason, if there is uncertainty with the diagnosis, it is important to do a biopsy just to rule out any type of fungal infection. This will clarify the problem so that you can move forward with treatment.

As we have already determined, osteosarcoma is very aggressive and it requires a very intensive treatment plan. After amputation, which is almost always required, chemotherapy will begin. The most successful chemotherapy treatments on the market are usually cisplatin and carboplatin. The carboplatin is pricier, but it is much easier to use. You can talk to your vet to see which treatment option is going to be best for your dog, and for your budget.

They may also recommend radiation therapy to help reduce the inflammation and pain the joints, especially if you opt against the surgery. While this will not usually do anything to prevent the disease from progressing, it can help to make your dog more comfortable.

With proper treatment, the prognosis will definitely vary depending on your dog’s overall health. Many people have found that their dogs live over a year after a successful surgery and chemotherapy treatment. This is definitely the best course of action to take if you want your dog to have the best outlook possible.

Can Osteosarcoma in Dogs be Prevented?

There are a lot of diseases and health issues that can be successfully prevented in dogs, but it looks as if osteosarcoma is not one of them. There are really no risk factors other than breed, age and gender, which cannot be altered. As research continues on this subject, there will hopefully be breakthroughs in medical technology that allow for early detection and treatment that isn’t as invasive. This, however, isn’t an option currently.

As you can see, osteosarcoma in dogs is extremely life threatening. If you notice any of the signs or symptoms of this form of cancer in your dog, schedule to see your veterinarian right away. You don’t have time to sit back and let it progress, especially if you want them to have a chance to make a recovery.