Symptoms and Treatment of Mastitis in Dogs 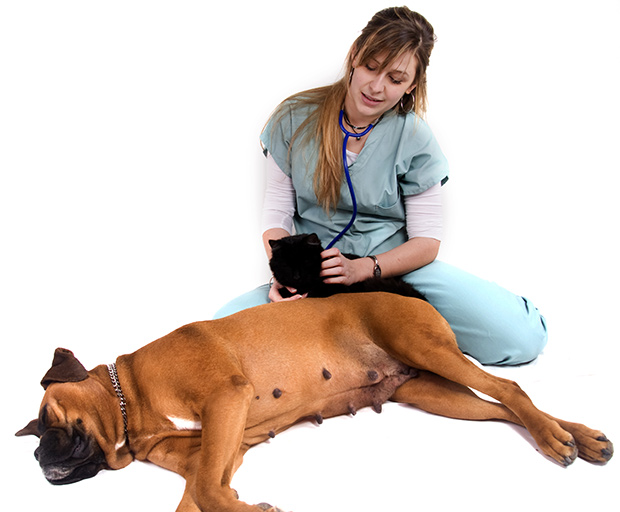 Mastitis is an infection that female dogs can sometimes suffer from, typically while nursing although it has sometimes been found in non-breeding dogs. While nursing her pups, the teats of the dog can become cracked and split, allowing the perfect opening for bacteria to enter. Once it does, it then multiplies fairly quickly and doesn’t take long to become a fairly serious infection. Mastitis in dogs can be extremely painful and sometimes the pain can become so great that the dog won’t even allow her pups near her to nurse.

Symptoms of Mastitis in Dogs

The first sign you might notice might not be from the nursing mother, but from her pups. Because the dog won’t allow her pups to nurse due to the pain, you may hear loud crying from the pups that doesn’t stop, and the pups may become lethargic, and cry and paw at their mom. If you suspect that the dog has mastitis, these are some of the symptoms you can look for:

The good news is that mastitis is very easy to spot. Looking at the mammary glands will give you a fairly good indication of whether or not mastitis is present and if so, a vet will be able to determine it right away. It is important to take your dog to the vet right away if you suspect she has mastitis. Not only do you want to get rid of the infection and make her as comfortable as possible, leaving the infection untreated for too long can be very dangerous to the puppies if they’re not able to feed due to her pain. Getting veterinary treatment right away will also lessen the severity of the infection and the treatment needed.

In order to help keep your dog comfortable while she’s on the antibiotics, applying warm compresses on the affected teats can relieve the pressure and even encourage milk to flow. If it does, be sure to save it in a container, as you can use this to hand-feed the pups should she not be allowing them to nurse. The chances are that you’ll need to do this anyway, as the vet will likely not want the pups to nurse from infected teats.

In the most severe cases, the vet may recommend that a full mastectomy be done by removing the entire mammary gland. This is a very drastic step, which is why vets often use it as a last resort only.

If the infection is found in an older dog that is not nursing puppies, the case can become more worrisome. Typically additional tests will need to be performed to rule out other types of diseases such as cancer of the mammary gland.

How to Prevent Mastitis in Dogs

Although not common, mastitis isn’t necessarily a very severe condition however, prevention is still important to ensure that your dog and her pups remain happy and healthy. Because mastitis more often than not occurs in lactating female dogs, one of the best forms of prevention is to have her spayed so she cannot become pregnant again. However, there are other forms of prevention that can also be done for a dog nursing her pups.

Mastitis in dogs isn’t necessarily a severe condition, but it is one that you need to watch out for, especially in a female dog that’s nursing. If left untreated, it cannot only have dangerous consequences for your dog, but also for her pups is she won’t allow them to nurse. And just like any other condition that might affect your pet, prevention is one of the most important steps in ensuring that your dog and her pups remain happy and healthy.