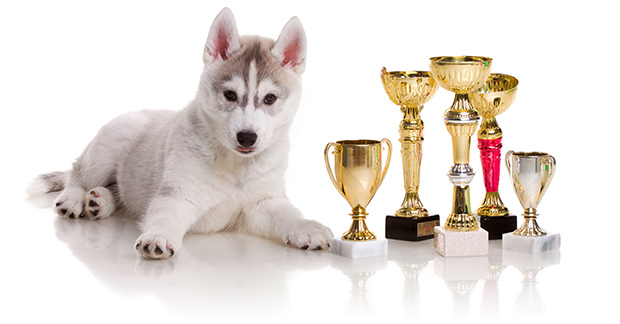 Each year, dog lovers across the nation get together for some great annual dog show events. If you love dogs, then you may want to attend. The good news is that they have prestigious dog show event all around the country throughout the year, and there may be one in a town near you. We will take a look at a few of the most popular dog shows around the globe in just a bit.

What You Should Know Before Attending Annual Dog Show Events

If you have never been to a dog show, then you might not really understand the terminology that is used. The terminology is pretty much the same across the board. Here are a few terms that you will want to be familiar with:

If you aren’t familiar with these terms, then you may not know too much about what is going on at the dog show, or how things are judged.

Typically, there are 7 different groups of dogs that are involved in dog shows. If you attend a dog show, you will likely see one or more of these types of dogs:

How the Judging Works

Each kennel club has a set of standards by which they judge particular breeds. This is a written description of the ideal for a particular breed. The following traits are used when judging:

This just names a few. Some judges may have more individual standards that they expect. Before you get into a dog show, you may want to look into the written standards for your breed. A few of the most popular awards given in the Best of Breed competition include:

Most of the judging criteria will sound like foreign language to someone that has never attended their first dog show. Don’t let it overwhelm you. Once you go to a few shows, you will start to pick up on the terminology and how things are done. Just go and have fun, and you can pick up on the technical information later on!

How to Get Your Dog Into a Dog Show

If you have been working with your dog, and they are of show dog quality, then you may be interested in getting your dog into a dog show. Various different Kennel Clubs, such as the American Kennel Club, will host their own dog shows throughout the year. If your dog is registered with one of the kennel clubs, then they may be eligible to compete. You will want to first check the requirements for participation in the show to make sure that your dog is eligible.

Before you even think about putting your own dog into a dog show, it is a good idea to attend a show just to watch first. This is an important step, because it gives you the ability to see what goes on and familiarize yourself with the activities. You can find local dog shows advertised in your local newspaper, in pet shops, on the radio, or other outlets in your town.

Taking a breed handling class is another important step. This will allow you to familiarize yourself with how to handle your dog when you have them in the show ring. They will teach you methods, and you will be able to practice with your pup outside of the ring before you actually attend a show with your dog. If you don’t want to handle your dog yourself, you may even consider hiring a professional breed handler in your area.

Without further ado, let’s take a look at some of the most popular annual dog show events around the world:

The Westminster Kennel Club Dog Show is probably one of the most popular dog shows in the entire world. People love it because it is a ‘benched’ dog show, which means that you will be able to take a look at all of the dogs even when they aren’t out on the show ring being judged. This dog show is live from Madison Square Gardens, New York. It is typically held in February each year, and it has hound, toy, herding and non sporting groups competing the first day, and sporting, terrier and working groups competing the next day. Typically, all breed judging will be available on their website.

The Kennel Club of Philadelphia hosts their annual dog show each year in November. They have two shows each year held around the same time of year, and both of them are ‘benched’ shows, and they allow all breeds. It is sanctioned by the American Kennel Club and their shows help to raise money for canine related causes, including the University of Pennsylvania’s Veterinary School.

Thanksgiving Day, after the Macy’s Thanksgiving Day parade, you will see the National Dog Show aired live on CBS! This is one of the most widely watched dog shows in the world. Some people even make this show part of their annual Thanksgiving Day traditions. It is also a part of the American Kennel Club. While it is not televised live, it is usually filmed each year mid-November. When you sit down on Turkey Day to enjoy your smoked turkey, dressing and cranberry sauce and other fixin’s, make sure that you flip to CBS and take a look at this ever popular dog show.

The American Kennel Club has several annual dog shows across the country. They list all of their events at www.akc.org/events/. With over 22,000 annual events across the nation, there is sure to be one in a town near you! They not only have dog shows, but they also host trials and field events that help to show off a dog’s training and skills.

The Seattle Kennel Club hosts their annual dog show in March each year at the CenturyLink Field Event Center. In 2015, they will have their 138th and 139th show, so it seems that their shows are pretty successful! To learn more about the shows in Seattle, visit www.seattledogshow.org/dog-shows/.

For those of you in San Fran, the Golden Gate Kennel Club Dog show is a great choice! It is held at the end of January each year. It is also considered a ‘benched’ dog show. They have a Best in Show judged each day, and you get a chance to get to know the dogs that are competing! This isn’t something that is offered by many of the annual dog shows anymore.

This is Denver, Colorado’s annual dog show with over 3000 dogs competing. Dogs in this show are tested in conformation, rally, agility and obedience skills. This isn’t really a huge dog show that is televised each year, but it is really a bit deal in Denver! It is held in February each year, and there are over 184 different breeds competing. If you plan to attend the event locally, you will pay $5 at the door. Kids, however, can get in free.

As you can see, there are a variety of different annual dog show events held each year. If dog shows are a passion for you, then make sure that you plan to attend one this year. If you have never been before, then you don’t know what you are missing out on. Dog shows are a whole lot of fun, and it really does help you to learn more about dogs and how they think, behave and react – not to mention the fact that there are a lot of adorable dogs for you to see!

Don’t see a dog show in your area? Check out the sites for the American Kennel Club and other kennel clubs across the nation, because this will show you the shows in the smaller towns across the United States. Chances are there is something going on near you. Don’t be afraid to go to your first of many annual dog shows. There is something there for all dog lovers, even if you just want to watch before you get started showing your dog. Even if you can’t make it to a live event, you should check out one of the televised dog shows. This will at least help you to see the ins and outs of what goes on at these popular shows.

If you aren’t ready to enter one of the many annual dog show events, why not host your own in the backyard? You can invite your friends and put together a mock dog show where you let the pups do their tricks and show off their dashing looks! This is even something fun that you can do with the kids. If you have kids, let them be the judges. Sure it is just fun and games, but you will make some incredible memories! Make sure that you take pictures.

Have you ever been to a dog show before? If so, share your experience with us! Is your dog a show dog star? Share their accomplishments and brag on them a bit in the comments below!