Dog Vision – Everything You Wanted to Know 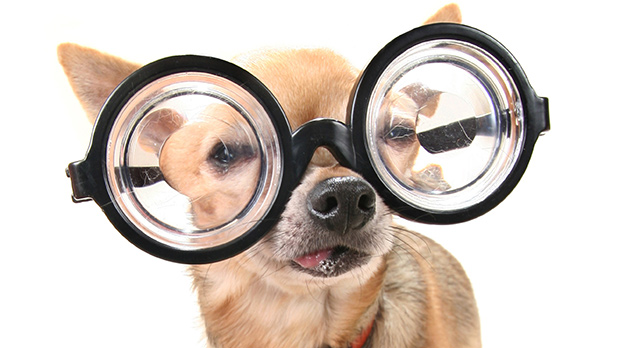 There are many myths floating around about dogs and how their bodies work, including the one stating that dogs can only see in black and white. Until recently, this myth was considered true by many, including those in the scientific and veterinary community. However in 2013, a team of Russian scientists performed a study with a small group of eight dogs of mixed breeds that showed that dogs can see in color after all.

The study was conducted by a team of researchers from the Laboratory of Sensory Processing at the Russian Academy of Sciences. They printed four different pieces of paper in different colors: dark yellow, dark blue, light yellow, and light blue. They placed these papers in front of boxes. Inside three of these boxes were food bowls and in the fourth, a piece of raw meat. The dark yellow paper was placed outside of the box containing the raw meat, to determine if a dog could differentiate between colors and brightness and choose the box with the raw meat.

Each of the eight dogs were allowed to come in and try to open one box before they were taken away. They were then brought back and allowed to try again. In this study it took only three trials before dogs could differentiate between the different colors and six out of eight dogs made the choice based on color between 90 and 100 percent of the time.

But while a dog’s world is more colorful than we originally thought, dog vision is still certainly quite different than that of humans.

It’s often easiest to understand dog vision if you first understand human vision. We typically have three cones in our eyes. These cones are actually color receptors and are the reason we can identify reds and greens, blues and yellows. Within these colors are different tones, hues, and intensities that when perceived by the brain, allow us to see the world full of color as it is. Of course, some people are colorblind, usually meaning that they cannot distinguish red-greens or blue-yellows. However, this condition in people is the exception rather than the rule.

Many people believe that because dogs cannot distinguish all colors, that they too are colorblind. However, humans that are color blind still have all three cones, but one or more of them is defective. Dogs cannot distinguish between all colors because they are born with only two cones in their eyes, meaning they are not actually color blind, they are simply anatomically different.

Most dogs cannot distinguish reds and greens, although this isn’t always the case. There are also other differences pertaining to a dog’s vision, including the fact that they cannot distinguish between varying shades of grays as well as humans can, but they are much more sensitive to varying degrees of brightness. 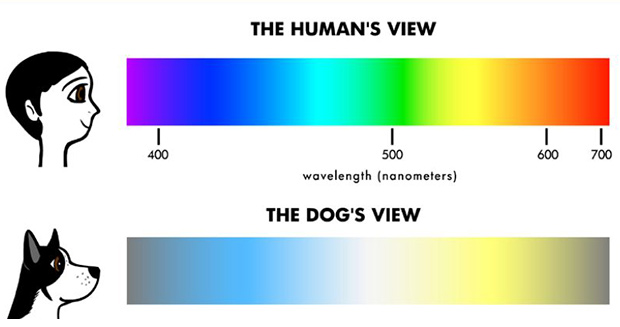 A Dog’s Vision and Their Prey

While dogs may not be able to see as many colors as humans, their vision does surpass ours in some cases. Dogs can detect motion at a distance anywhere from 10 to 20 times better than a person can; and their peripheral vision is far better than that of a human’s. And because their eyes are not as sensitive to brightness, their eyes are especially adept at seeing at dawn and dusk.

All of these characteristics of dogs’ eyes and their vision make them much more adept at hunting. They can see small animals moving at a great distance, and they can see much more around them through their peripherals, meaning they can detect even more prey.

The recent discoveries made in dog vision are remarkable, and they certainly allow us to better understand how dogs see. Even more, we now know that a dog’s world is much brighter than we originally thought. Who knows what they’ll find next!