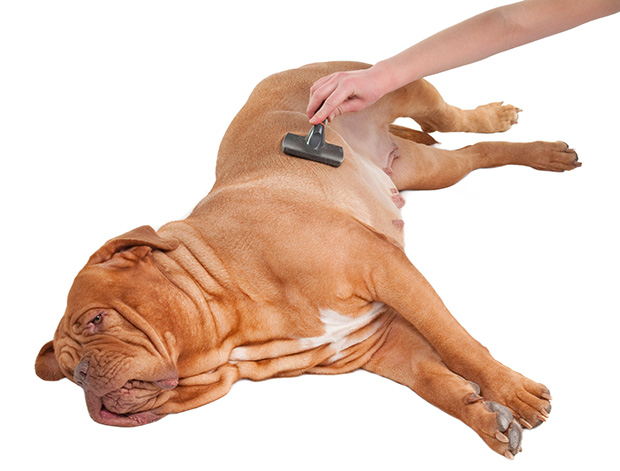 Lipoma in dogs is when a lipoma, a mass or tumor, has been found underneath the skin. The lumps are also known as fatty skin tumors. In dogs they most often appear on the belly or trunk and as the dog ages, more lipomas will form. These tumors are typically very soft and can be moved slightly underneath the skin. Typically the overlying skin isn’t affected by the mass. While finding any lump or bump on your dog is going to be worrisome, it’s important to note that lipomas are benign and don’t usually bother the dog at all.

Once one lipoma has been found on a dog, it’s likely that more are going to appear. These too, are typically harmless and malignant. These types of lipomas don’t even usually need to be removed, although a vet may recommend they are if they are in an area that’s bothering the dog.

Infiltrative lipomas are a type that forms in and around muscle and/or organ tissue. Because of the vitality of the tissue connected to the tumor, these types of lipomas may need to be removed.

Often dog owners are the ones to find a lipoma while they are brushing or petting their dog. However, vets may also be the first one to discover them while performing a physical exam. To determine whether or not the mass is a lipoma or another type of tumor, they will perform a needle aspirate. If those test results are inconclusive, the lipoma may need to be surgically removed.

Because of the sensitive area that surrounds infiltrative lipomas, a surgeon will often perform a CT scan or MRI to determine the exact size and location of the mass. This will help them determine how much of the mass can be removed through surgery, and what surgical approach is best.

Treatment of Lipomas in Dogs

More often than not, lipomas don’t need to be treated at all. Unless they are in an area that is bothering your dog, they are typically left alone. If it’s determined that the mass doesn’t need to be removed, it’s important that you monitor it and keep a close eye on it to make sure that it doesn’t change in size or shape.

However, if the mass is bothering the dog it will need to be removed, and if the tumor appears to be very aggressive, the vet may want to remove the entire mass while the dog is still under anesthesia. Surgical removal can be complicated if the mass is quite large while small masses are typically removed very easily.

If it’s determined that surgery is necessary to remove the lipoma, the vet will most likely perform a number of tests to ensure that the dog is healthy enough for the surgery. These may include chemistry tests, antibody tests, a complete blood count, electrolyte tests, a thyroid test, and an ECG to screen for abnormal heart rhythms.

Because infiltrative lipomas are actually inside muscle and organ tissue, complete removal can be difficult if not impossible. Because of this, radiation therapy has been used alone, and in conjunction with surgical removal.

Finding a lump anywhere on your dog can be very scary, but it’s important to remember that it may just be a lipoma and that lipoma in dogs is actually very common, and not at all dangerous. Still, it’s important that whenever you find a lump or bump on your pet, you have it looked at by a vet as soon as possible. There is still a chance that it’s a mass mimicking a lipoma and if so, leaving it untreated could have disastrous consequences.