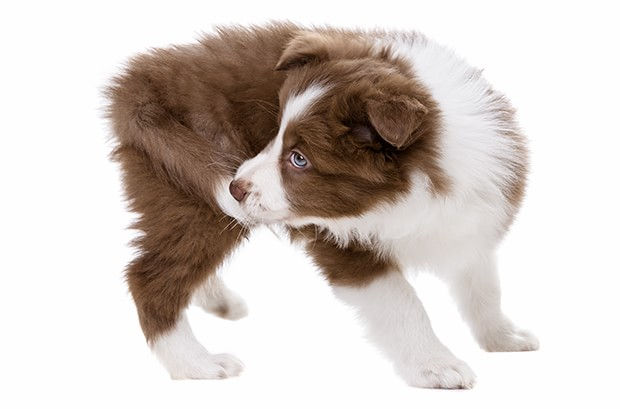 While you might not be aware of this, OCD isn’t just a condition that affects humans. In fact, OCD in dogs is seen more than you would realize. The only thing is it isn’t actually called OCD. They just have compulsive behaviors, but if you really think about it, it really does seem a lot like OCD. You can’t really call it OCD, because with OCD, you pair obsessive thoughts with compulsive behaviors. Since it is next to impossible to know a dog’s thoughts, well- you get the idea. So, yes, dogs can have compulsive behaviors and compulsive disorders.

A few common compulsive behaviors include:

You will notice that many of these behaviors are pretty common for dogs, but when it gets out of hand is when it is classified as compulsive. Just because your dog chases his tail from time to time doesn’t mean that he has a compulsive disorder though.

The Causes of OCD in Dogs

Compulsive disorders in dogs are caused by a variety of different things.

The main three causes include:

If your dog is having a stressful moment, neurotransmitters are released as a response to that stress. To relieve stress in these situations, the dog may take part in a comforting behavior that seems ‘normal’ at first.

Over time, if this behavior works when it comes to calming the down, they will start to do it more often. They may even start to do it to prevent stress. It can become more of a ritual to them than anything, and this is when it can start to become compulsive.

Is Compulsive Behavior in Dogs Dangerous?

One question that we are often asked is whether or not compulsive behavior in dogs is dangerous.

The truth is that not all compulsive behaviors are harmful or dangerous to your dog, but some of them can be. This is why it is necessary for you to pay close attention to your dog if they start any repetitive behaviors.

For instance, if your dog chases his tail too much, he could end up mutilating his tail if it becomes too compulsive for him. This could lead to infection, pain, and even amputation. It is important to keep an eye on your dog’s behavior to ensure that they aren’t doing anything that could cause them harm. Compulsive skin licking can even be dangerous, because it can make the skin raw and irritated, thus prone to infection.

These are all behaviors to watch out for.

Could Your Dog Just Be Seeking Your Attention

Sometimes these compulsive behaviors will actually be a way for them to seek attention. If you think that this could possibly be the case with your dog, it is a good idea for you to set out something to record your dog’s behaviors when you are not at home. If you do this, you will be able to rule out whether or not your dog is just seeking attention.

If they don’t do it when you are not there, then chances are they just want you to spend some extra time with them. Start by spending a little bit more time with your dog, and getting them interactive dog toys to play with when you are not at home. This may help them to not seek attention in negative ways.

Did you know that sometimes compulsive disorders in dogs can actually be hereditary?

There are some dog breeds that are more prone to certain types of compulsive behaviors. German Shepherds and Bull Terriers are most known for chasing their tails, while Labrador Retrievers are compulsive about eating things and are prone to a behavior known as pica. If you are unsure if your dog’s breed has a predisposition to a certain compulsive behavior, it is worth talking to your veterinarian about.

They will be able to help you learn more about breed specific behaviors and how to stop potentially harmful behaviors.

Finally, we will take a look at treatment of compulsive disorders in dogs.

First of all, you will start by talking to your veterinarian about your treatment options. Certain medical conditions can actually trigger these behaviors, so you need to rule out certain issues before you start a treatment plan. For example, neurological problems, endocrine issues, gastrointestinal disorders, and orthopedic problems can all lead to compulsive behaviors.

If this is the root cause, then you need to treat it at the root of the problem rather than just trying to cover up the behaviors. It is best to have a full physical and a workup on your dog’s labs completed.

If all of the tests come back okay, and your dog isn’t in any pain, then they will probably diagnose your dog with a compulsive disorder.

Typically, the main course of treatment that is used to treat this type of disorder in dogs is medication that helps to lower their arousal to the conflicts and stress. Lowering their stress is typically the best way to stop the behaviors. The good news is that treatment is usually effective, but the bad news is that you typically need to keep them on the medication for the rest of their life to keep them from behaving erratically and compulsively.

As you can see, OCD in dogs is quite different than it is in humans, and it even has a different name for it. Now that you know more about it, you will be able to look for signs in your dog and make sure that you catch it early on before it becomes a really big problem.