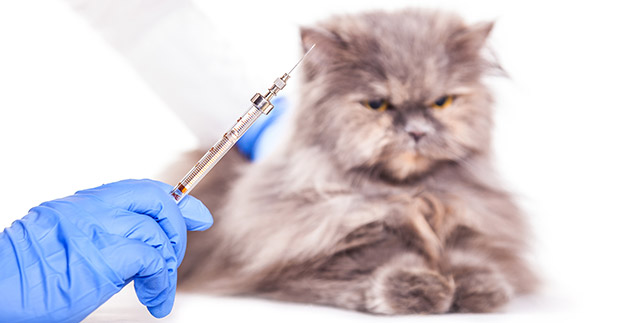 Rabies is one of the most well-known viruses that affect animals, and it is also one of the most deadly. It is actually an inflammatory infection that targets the Central Nervous System (CNS), including the brain and spinal cord. Typically, rabies in cats is transmitted to cats by a bite from another animal that carries the disease. Some of the most common animals to carry rabies include:

The virus is transmitted through their saliva when they bite another animal. Once the rabies virus gets into a cat’s body, it spreads to the central nervous system. It can take about a month for rabies in cats to develop to the point of having symptoms, but once this happens, it will progress rapidly.

One of the scariest facts is that this severe and often fatal virus can also be transmitted to us humans. This is why it is so important for you to be aware of rabies and how to effectively prevent it.

The Signs of Rabies in Cats

There are two different types of rabies, and they include furious and paralytic. Typically, in the early stages, or the prodromal stages, the cat will only have mild central nervous system abnormalities. Typically, this stage lasts anywhere from one day to three days. Most cats then go into either the furious stage or the paralytic stage, or even a combination of these.

Furious rabies causes really severe and bizarre changes in behavior. Sometimes they may be overly aggressive, or even attack for no reason. In paralytic rabies, cats will typically lose their coordination and become very weak and lethargic, and eventually will become paralyzed.

Here’s an example of an unvaccinated 8 month old rabid cat:

Rabies is very fast moving, and if you don’t treat it right when you notice symptoms, the prognosis doesn’t usually look very good. If your cat has been in a fight, or gotten bitten or scratched by an animal, then it is time to take a trip to your vet just to be on the safe side. Even if they have been vaccinated for rabies, you can never be too safe.

Symptoms of Rabies in Cats

The Causes of Rabies in Cats

Rabies is a single stranded virus that comes from Lyssavirus, which is closely related to Rhabdoviridae. It is typically transmitted through an exchange of saliva or blood from an infected animal to another animal. Very rarely, it can be transmitted by beating gases that escape from animals that are decaying. It is not common to catch the virus this way, but it can happen. It is more likely in caves that have a lot of bats with a widespread presence of rabies virus.

If you even have a slightest thought that your cat may be infected with rabies, you need to call your veterinarian. If you can safely do it, try to cage your cat and take them to the vet where they will be quarantined. If they are vicious and in attack mode, or if you feel like you are at risk to try to catch them, then give your local animal control a call and have them come out. They have protective wear to keep them from being bitten and infected.

Typically, your vet will start with a 10 day quarantine to confirm the infection. Sometimes, rabies is mistaken for other conditions that may lead to aggression, which is why you have to have some blood work done to confirm the condition. If it is confirmed that your cat has rabies, the vet may recommend having them put to sleep.

The best thing that a cat owner can do is vaccinate to prevent rabies. It is important to keep a record of your cat’s rabies vaccinations so that you can keep them on file at the vet, and prove it if necessary. The sad truth is that rabies is almost always fatal if the cat has not been vaccinated against it. Typically, within 7 to 10 days of the first sign of rabies the cat will pass away from it. All confirmed diagnoses must be reported to your local health department right away. Anyone that may have come into contact with the cat needs to seek medical attention as well.

As you can see, rabies is really a fatal condition, and sadly most instances that have been reported with rabies could have been prevented by sticking to the regular vaccination schedule. It is so important for you to have your cat vaccinated regularly. You should take them to the vet once every six months or so for a checkup, and they will be able to recommend any vaccinations that are necessary for your cat at their particular stage of life. Without these important vaccinations, your cat’s life may be cut short. Don’t play around with rabies and other serious viruses and diseases, especially when there are vaccinations to prevent!

Rabies in cats is serious, and all cat owners need to take it seriously. You can’t have that mentality that it won’t happen to your cat. Guess what, most people who have had cats that have died from rabies probably didn’t think that it would happen to their cat either. Learn the facts about rabies and get your cat vaccinated asap.