Symptoms and Diagnosis of Mange in Dogs 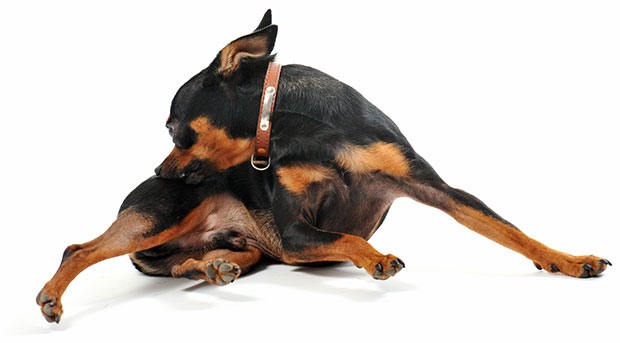 Believe it or not, Mange Mites are not only common on dogs, but they are all over every dog, as a natural parasite on their skin and hair follicles. Canine scabies, more commonly known as mange, are a different type of mite that can become a real problem. And, even though some types of mites might be normal to find on your dog, any kind of mite can cause infections of the skin if they become too overpopulated. While treatment for mange in dogs can vary from long-term to a short and full recovery, every pet owner needs to be able to recognize the signs of mange, as well as how to treat and prevent it.

It starts with knowing what exactly mange is.

There are two different types of mange mites.

The first type is Sarcoptic Mange, which are small, oval mites that are light in color. These mites are easily transferred from one dog to another and, they can also be transferred to humans. Because they’re microscopic, it’s impossible to tell just by looking if your dog has them. Sarcoptic mites can cause problems such as skin infections for your dog, and one dog can easily pick them up from another. The most common areas of the skin to be affected by sarcoptic mites are the legs, face, ears, and elbows.

Demodectic mange mites are a different type of mite, and it’s this type of mite that all dogs naturally carry around. While dogs are not born with them, they do get them from their mothers during the first few weeks of their life when their mother is holding them and carrying them around. Dogs can also pass these types of mites to each other, but usually they will simply add to the mites the dog is already carrying around, without an infection or problem occurring. Demodectic mites cannot be transferred to cats or humans.

When it comes to demodectic mange mites, there are three different kinds that range from minor to major:

Symptoms of Mange in Dogs

Because all mange comes from a type of mite, it would be logical to assume that your pet will suffer the same symptoms, no matter which type of mange they have.

In fact, different mites bring different symptoms, so it’s important to know what all the possible symptoms you might have to be on the watch for, or determine what kind of mange mite your dog is suffering from before moving on with treatment.

Diagnosis and Treatment for Mange

Mange mites are not like fleas that you can easily spot after examining your dog. They are microscopic and so, impossible to see with the human eye alone. If you think your dog might be suffering from mange take them to see a veterinarian as soon as possible. The vet will most likely perform a complete physical exam and scrape the skin for further analysis.

They may also try to visually see the mites by using a microscope. However, even all these measures are often not enough to properly diagnose mange. When the mites are buried deep within the skin, the vet might not always be able to find where they are located. When that’s the case, they’ll instead study the dog’s history and look for clinical signs before making their diagnosis.

If it’s sarcoptic mange that your dog needs to be treated for, the most important first step is to quarantine them from other animals and humans to keep the mange mites from spreading. Antiparasitic medications, which will kill many of the parasites on your dog’s skin, may be prescribed for your dog as well as some anti-inflammatories to help with the itching and scratching. Typically this type of treatment will take about four weeks to work.

Although isolation isn’t necessary with demodectic mange, your dog will most likely be prescribed medication to help with any infections, as well as to ease the itching. In order to help heal any infections that have developed due to the mange, a Medicated Shampoo for Dogs may also be prescribed.

Before treating your dog with any type of shampoo or other treatment for mange, or any other skin condition, make sure you speak to your vet about it beforehand. Some medications can actually be toxic to your dog when used in excess, and you don’t want to make a bad situation worse.

For younger dogs, these treatments can often mean a short duration of suffering from mites, and even a speedy full recovery. Dogs that are middle-aged and older however might have a harder time recovering from mange and could even require long-term treatment for the disease. No matter what form of treatment is being given, dog owners are encouraged to take their dog into the vet every two weeks to have their skin scraped and tested to ensure that the mange is not getting worse, or recurring after it’s been treated.

Mange in dogs can be a very inconvenient disease, forcing you to thoroughly strip bedding, replace all animal collars, leashes, and toys, and take your dog for regular treatment sessions. However, it’s important that you seek help immediately after determining your dog has mange and to never let the condition go untreated, as this could lead to much larger problems of the skin and hair follicles.