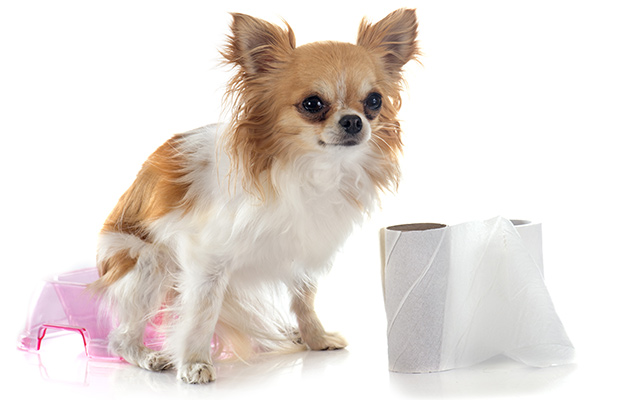 Whipworms are robust intestinal parasites that are actual worms measuring about two or three inches in size. The front of them is small and whip-like, hence their name, while their back end is much thicker. The medical term for whipworm is Trichuris, named after the type of parasite that feeds off various hosts. Whipworms in dogs are one of the four most common canine parasites and infections can become quite severe if left untreated for too long.

Causes of Whipworm in Dogs

In order to understand the cause of whipworms, you first must understand their life cycle. The eggs are passed through the feces and if left in the right conditions, can become infectious 2 to 4 weeks after that. If the dog then ingests any of that feces (either while grooming or eating things found on the ground), the eggs will then travel to the small intestine where they will hatch. From there the parasitic larvae will move to the large intestine and attach themselves to the lining of the intestine walls. By attaching themselves to the host, they can then feed off the blood of the host animal.

Once the larvae have been in the large intestine for about 11 weeks, they’ll become fully mature and able to produce more eggs. Once those eggs have been produced they can live in the intestine for years, or be passed through the feces to possibly spread to other animals.

Dogs can contract whipworms when they ingest anything that has been contaminated including food, water, feces, and flesh.

Humans have their own species of whipworm that they can become infected with, and this has led to some believing that humans can catch whipworms from their dog. However that is not the case. Whipworms that infect dogs have never been shown to be a significant threat to humans.

Symptoms of Whipworms in Dogs

At the beginning of a whipworm infection, there are typically no symptoms because there are not yet enough whipworms to present a problem. However as time goes on and the infection becomes worse, inflammation of the intestine can occur. This is often the first signal to dog owners that something’s wrong because the pet’s abdomen will become tender, the underbelly may appear swollen, and the dog may cry or whimper when the area is touched.

Other symptoms that may be present with whipworms are:

Severe infections can cause dogs to become anemic, showing pale gums and extreme weakness along with rapid weight loss. Whipworms may also cause an electrolyte imbalance, which may also cause the animal to become extremely weak.

If you think your dog might have a whipworm infection, it’s important to get them to the vet right away. Because whipworms take so long to actually present symptoms, the chances are good that the infection has already grown considerably.

Just like when searching for other parasitic infections such as hookworms or roundworms, when trying to reach a diagnosis a vet will perform a fecal flotation, where they look at a stool sample under a microscope. They will be looking for the eggs of whipworms to determine their presence. However, unlike those other parasites, whipworms don’t always produce eggs, meaning that there may not be any present in any one stool sample. When this is the case, the vet will most likely ask that you collect different stool samples that can be tested. If still none are found but a whipworm infection is strongly suspected, vets will often start whipworm treatment anyway.

How to Treat Whipworms in Dogs

Treating whipworms can be difficult for two reasons. The first is that they can be highly resistant to common de-worming medications, meaning that you and your vet may have to try several before finding one that works. De-worming medication is used for many different parasites and will destroy both the adults and the larvae in the system.

Another reason whipworms can be difficult to treat is that because they are so robust and can survive in their environment for so long, reinfections are very common and they can become a chronic problem. In order to ensure that all of the parasites were destroyed during initial treatment, most vets will recommend another follow-up fecal flotation a week or so after treatment is finished. Even still, for best results repeated treatments after three weeks and after three months of treatment is typically recommended. This can help prevent reinfections and chronic infections.

Because whipworms can be so difficult to get rid of, pet owners are advised to do as much as they can to prevent whipworms from ever presenting a problem in the first place. Keeping your yard clean of feces at all times and avoiding areas where your dog will be kept in close confined spaces with other animals will also help prevent them from ever contracting whipworms.

In addition to keeping a dog’s area clean, and making sure they’re not picking anything up from other dogs, your vet should also be checking for whipworms during your dog’s annual exam. This is one of the best ways to prevent whipworms in dogs.