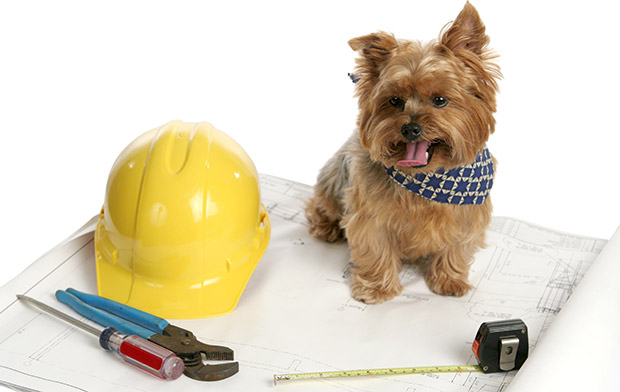 Dogs are so diverse and skilled in many disciplines, but most working dogs usually have many similar characteristics. Often the top working dog breeds are robust, intelligent, and obedient. Throughout history these dogs have helped mankind in a variety of ways. Theses breeds have often been used as guardians, police dogs, service dogs, rescue dogs, and even sled dogs. Though they come in many shapes and colors, they are all workaholics and great breeds to choose from.

Most classes of working dogs are bred primarily for their abilities rather than for show. Typically working dog breeds are muscular, medium to large in size, and excel in obedience and physical activities. They are also very capable animals, and if properly trained can do well in almost any setting.

Specific breeds are also preferred for certain jobs and canine disciplines. Canines are trained to assist humans in any number of capacities including sight, hearing, physiological disorders, epilepsy, and even allergies. Commonly these dogs are referred to as service dogs and include working dog breeds like Labrador Retrievers, German Shepherds, and Golden Retrievers.

Another category includes search and rescue (SAR) dogs that are bred and trained to rescue lost victims and survivors of disasters. Some of the most common SAR dog breeds include Border Collies, Belgian Malinois, and Labrador Retrievers. Another group is K-9 forces – dogs that are used for police, fire, military, and tracking work because no one wants to mess with a big dog. Some of the most common breeds for this type of work include Rottweilers, Boxers, Dobermans, and American Pit Bulls.

This is not only one of the top working dog breeds, but is the number one registered dog breed with the American Kennel Club. These dogs are built for sport, with boundless energy and keen intelligence. They are also loving and companionable. These dogs originated in Newfoundland, bred for jumping in the icy water and retrieving fishermen’s nets. They were tireless swimmer and could tolerate the harsh climates of the area. Today their working dog status is far more extensive. Because of their name, good natures today these dogs are also commonly used as service dogs and therapy dogs.

Generally Labrador Retrievers weigh between 55 and 80 pounds with an average lifespan of 10 to 12 years. They have a sleek, easy to care for coat of two layers. They usually come in chocolate, black, or yellow.

Another one of the most common working dog breeds is the German Shepherd. These dogs are strong, and intelligent. Because of their many talents, these dogs are one of the most desirable breeds for police, military, and guarding work. As you might have gathered from the name, these dogs originated in Germany. Bred in the 19th century, German Shepherds were often used for herding. They had a great work ethic, but were also a very companionable breed. Today these dogs still have a longstanding reputation as capable working dogs.

Generally German Shepherds weigh between 75 and 95 pounds with an average lifespan of 10 to 14 years. They have a medium-length double coat that will protect them from snow, wind and rain. However, these dogs are known to shed. These dogs are not known to be aggressive, and if well trained and socialized, they will make strong protectors of your family and home. They will require plenty of exercise and will thrive when they have a job to do.

Border Collies are yet another easily recognized working dog, at least when it comes to their common use for herding. These dogs were specifically bred in Scotland and England to gather and control sheep. As such, these dogs are known not only for their herding drive, but also for their stamina. In fact, their boundless energy is one of the most common frustrations for owners of this breed. They also have a stalwart work ethic. Often these dogs will require active owners. Those who will be able to give them the exercise and engagement they need to stay happy.

Generally Border Collies weigh between 30 and 45 pounds with an average lifespan of 12 to 15 years. Border Collies have two varieties of coat: rough and smooth. Most often they are black and white, but also may be bicolor, tricolor, or merle. These make really good family dogs as long as they are raised well and socialized early. However, because of the herding drive they will try to herd children and other animals unless their energies are re-directed.

These dogs appear to be very similar to the German Shepherds, with similar builds, coloring, and distinguished black mask. They make not only great working dogs, but also reliable family protectors. This breed was developed in Malines, Belgium also as a shepherd dog. These dogs are active, smart, and will excel at almost any task placed before them. This is why the Belgian Malinois are often used for service work, police work, and search and rescue. They are also great at dog sports like obedience and agility.

Generally Belgian Malinois weigh between 40 and 80 pounds with an average lifespan of 12 to 14 years. These dogs are fairly large and intense, but they are also very people-oriented. This means they will want to be included for family activities and will want to play. If you are looking for a confident and protective work dog, the Belgian Malinois are a great breed to consider.

Another set of world class working dogs are the Golden Retrievers. These dogs were originally bred in Scotland. There were talented retrievers and hunting companions with wonderful noses and unflinchingly loyal to their humans. Today these dogs are energetic and often boisterous, but also particularly gentle and trustworthy with children. Their sweet natures are what make these dogs some of the best guide and assistance animals. However, they do not make very good watchdogs, more likely to welcome strangers than drive them away.

Generally Golden Retrievers weigh between 55 and 75 pounds with an average lifespan of 10 to 12 years. They have dense outer coats and thick undercoats, and they do tend to shed like crazy. They also love to eat, and have the tendency to become overweight if their diets are not monitored. Because Goldens are so popular, it is important to find a reliable breeder to select your puppy from.

The Great Pyrenees, great as in big and originating in the Pyrenees Mountains. At first these gentle giants were considered to be peasants’ dogs. Later, in the court of King Louis XIV declared the breed as the Royal Dog of France—sheep dog turned courtier. Though these are such a large breed, these exceptional working dogs are mellow and can actually be well mannered in apartments. They also do best in cooler climates, but you can expect some shedding from these furry beasts. They do need exercise, but only about 20 to 30 minutes daily.

Generally Great Pyrenees weigh between 85 and 160 pounds with an average lifespan of 10 to 12 years. Usually these dogs are all white, or white with markings. These dogs have sensitive hearing and can detect intruders. They tend to vocalize a lot, and will bark to ward off intruders and the loud bark will definitely scare strangers away.

These working dog breeds are medium sized, active, and athletic. They have a commanding and singular appearance, which reflects their more dominant natures. These dogs were bred in Germany to drive cattle and guard livestock and property. In the early 1900’s these dogs were first trained for police work and these intelligent and dignified dogs found their primary job they would become widely known for.

Generally Giant Schnauzers weigh between 55 and 80 pounds and have an average lifespan of 10 to 12 years. If these dogs are well trained and well socialized, there is no limit to their capabilities. However, to keep them happy at home you have to be sure they do not become bored. They can be destructive if not properly exercised, and you cannot let their brilliant mind go to waste. They will need at least an hour of exercise per day, so long walks or jogs are recommended.

These are beautiful, good natured dogs with a naturally positive attitude. They are hardy dogs, bred by the Siberian Samoyed people to hunt, herd, and pull sleds. Other duties included keeping people warm and tracking prey. These people treated their hard working dogs with respect and kindness and when the Samoyed traveled out of Siberia they were trusting and loyal to humans as a result.

Generally Samoyeds weigh between 50 and 60 pounds with an average lifespan of 12 to 14 years. They have a notable white, fluffy coat that can require a lot of maintenance when they begin to shed. These dogs are friendly and smart. They are also a challenging breed, learning quickly and loving to work out challenges so they do not get bored. It is important to keep these dogs active with hiking, games, and canine sports.

These elegant dogs are so striking and some of the hardest working breeds out there. Of course these dogs were bred to pull the sleds of Siberian nomads. They are also known as one of the oldest of dog breeds. Back then the huskies were exceptional family pets, used to keep children warmed while they slept. These are curious and good natured animals, getting along well with humans and other animals. They also require very little food to survive. They are also known to be mischievous, running away when let off leash and escaping from their kennels. They will need a fenced yard that is sunk in the ground to keep them contained.

Generally Huskies weigh between 35 and 60 pounds with an average lifespan of 12 to 15 years old. They have thick coats that come in a variety of colors. They also are known for their striking blue or multi-colored eyes. They commonly have facial masks that only add to the mystique of this hard working breed.

If you have seen a dog with a wrinkly face, large nose, and long drooping ears then you have likely seen the memorable Bloodhound. These working dogs were bred in medieval France for hunting. Their skilled noses allowed them to trail deer and boar, following even the coldest of trails. Though these dogs are often characterized as being lazy, front porch dwellers, they are actually quite active. As such, they will not do well living in an apartment, but would do much better in a large fenced yard. These are also pack dogs that need company, whether it is in the form of other humans, other dogs, and even other animals.

Generally Bloodhounds weigh between 80 and 110 pounds with an average lifespan of 11 to 15 years. The coat of a Bloodhound is loose and very thin, hanging down over their bodies and face. Generally these dogs are black and tan, or red. They will need early socialization and gentle training to help them grow into a well-rounded dog.