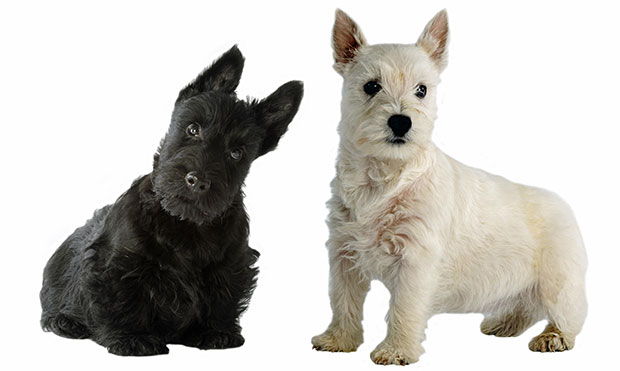 Terrier dog breeds are some of the more popular household pets, but feisty is a word often used to describe them. Terriers come in a variety of shapes and sizes. These animals are fondly referred to as the rascals of the dog world, but also some of the most beloved pets.

Their name actually comes from the Latin word terra, meaning earth. This is because Terriers were often bred to be hunters of burrowing animals like foxes, moles, and badgers. Rarely can they be trusted with smaller animals because of their more aggressive natures and strong prey drive. They can also be territorial and love to bark and dig. These little escape artists will need a solidly built fence with plenty of room to run and play, and plenty of engagement so they do not resort to destructive behaviors. Truth is, terriers can be a lot to take on, especially for a first time dog owner.

But these dogs are also athletic, protective, and loyal. They are smart breeds and highly trainable when matched with the right personalities.

Fortunately, though they come in a variety of shapes and sizes, most terriers are also fairly small. Their size makes them easier to control and better for a wide range of households. With some love and training, terrier mix breeds can be calm, friendly, and stable pets.

They were bred to work with hounds on fox hunts, and quickly became a favorite of many horseback hunters. As such, these dogs are spirited and spritely. They pack a lot of personality and can be willful animals, making them somewhat difficult to train. However, these dogs are also very amusing and will thrive with a structured routine. Generally Jack Russell Terriers weigh between 13 and 17 pounds with an average lifespan of 10 to 15 years. These high energy dogs are best suited to a large yard with a secured fence; otherwise, their fearless nature could get them into some trouble. It will take time and patience if you want to break some of “Jack’s” bad habits.

These dogs will need attention and supervision, and in return you can expect boundless loyalty and love.

These dogs are the largest of the terriers and were bred as otterhounds, meant to swim and scent game.

Throughout World War I these dogs were used as sentries, messengers, scouts, and carriers. They were fiercely brave and loyal, many of the traits they still reflect today, being one of the most versatile terriers. These dogs are known to be playful and adventurous, but also reliable and intelligent. Some would call this terrier dog breed headstrong and will likely hold a grudge against any aggressor, but for the most part they like to please their owners. Generally Airedale terriers weigh between 40 and 65 pounds with an average lifespan of 10 to 13 years. These are excellent watchdogs and will protect their family. But they will also tend to create mischief, snatching food from the counter or taking off with a smelly shoe.

Just keep in mind these high energy working dogs will need daily exercise to keep their puppyish behavior in check.

Originally these dogs were bred to be fighters, mixing bulldogs with terriers.

The result was a muscular body with a distinctive, egg shaped head. In 1860 those who were fans of the breed attempted to create an all-white version of the dog which became fashionable companions for gentlemen of the era. Because of their courtliness toward people and their ferocity in the fighting ring, the dogs were also known as White Cavaliers. The dogs are just as captivating today, being featured in everything from Toy Story to Target ads. Now the dogs are less known for fighting and more commonly regarded as friendly, clownish, and high energy. Generally Bull Terriers weigh between 35 and 75 pounds with an average lifespan of 10 to 15 years. Owners should start training and socialization early so their pets will learn the house rules and less aggressive towards other dogs.

These terriers will need plenty of play and strong leadership. Though they may be a challenge, the results are well worth the effort.

The Cairn is one of Scotland’s original terriers reaching as far back as the 1500s.

These fox like terriers have a broad head and strong muzzle, making them perfectly shaped for burrowing. In fact their name comes from “cairns,” the piles of stone often used as landmarks where fox and badgers would sometimes make their homes. These are alert and curious dogs which are mostly known for being independent. They are also cheerful, lovable, and loyal to their owner and leader. Generally Cairn Terriers weigh between 14 and 18 pounds with an average lifespan of 12 to 15 years. These little terriers love to dig and chase small animals. In some cases, because they are so pack oriented, these dogs can develop separation anxiety, stubbornness, and resource guarding.

To help them become well adapted to home life they need consistent leadership and plenty of exercise.

These dogs originated in northeast England along the border of Scotland, specifically bred to track and hunt pesky foxes.

As such, they have narrow, long, and flexible bodies so they can squeeze through small burrows and flush out their prey. These dogs are full of energy and endurance. Not only are they agile, but also bold in the pursuit of their quarry. Though they are small, they are also sturdily built with longer legs to keep up with horses during a hunt. Generally Border Terriers weigh between 14 and 16 pounds with an average lifespan of 12 to 15 years. Young terriers are very energetic and active, but they will mellow with age and training. However, other small pets like rabbits, guinea pigs, and hamsters might not fare so well against this natural born trapper.

Also, Border Terriers make excellent watchdogs, barking at strangers to ward them off, but will not be aggressive.

These easily recognizable dogs are believed to have originated in Scotland, and could date back to 55 B.C. when the Romans invaded Britain.

There is record of the Romans being surprised by these little dogs that would “follow their quarry to the ground”ת which is why they were called terrarii. The notable Scottie is short-legged, aristocratic, and independent. These dogs will not trust strangers, can prove to be quite stubborn, and will stand up for themselves when provoked. Generally Scottish Terriers weigh between 18 and 22 pounds with an average lifespan of 11 to 13 years. Though many terriers are known to be constant yappers, these Scotties are not. Their strong bark actually betrays their size, but not their determination. With these dogs around you will enjoy the companionship of a hard working pet that will rid your yard of vermin.

They are not necessarily a fun loving breed, but rather they approve of respectability and will be absolutely devoted to the right owner.

Though they look much like Pinschers, the Manchester Terriers are a breed all their own.

These dogs are one of the oldest known terrier breeds originally developed as a rat hunter in England. These dogs were considered to be the best vermin hunting breed because of their tenacity and power. However, with increased popularity the standard and toy Manchester Terriers became more and more companionable, especially during the rule of Queen Victoria. Generally Manchester Terriers weigh between 12 and 22 pounds with an average lifespan of 14 to 16 years. They have a short, shiny black and tan coat that requires almost no grooming. They are high spirited animals, but are also fast learners who are looking to please their owners. These lively dogs are also sharp witted and very loyal, forming strong bonds early with the right owner.

Also, this is not usually a yappy or barky breed, and work well in both rural and urban homes.

Another easily recognized terrier is the wirehaired fox terrier.

It is a medium sized dog with a flat skull, tapered muzzle, and narrow eyes. Historically these dogs were developed in the British Isles by crossing Dachshunds, English Hounds, Fox Hounds, and Beagles. Originally farmers used these dogs to keep animals from preying on livestock. These dogs usually come in two types of coat, both wired and smooth. The hairs grow so thick and close together that, even if you part them, you will not be able to see the skin. Generally Fox Terriers weigh between 15 and 19 pounds with an average lifespan of 10 to 15 years. These dogs, like most terriers are lively and alert. They are also known to be mischievous.

Without proper training these dogs are known to display behavior issues like dominance, resource guarding, and excessive barking. These dogs also love to eat, and if not fed properly are prone to becoming overweight.

According to the American Kennel Club, Miniature Schnauzers also belong to the terrier group.

Originally these dogs were bred in Germany around the turn of the century. Their name comes from the German word “schnauze”, which means muzzle and was an exceptional ratter. Their other talents included tracking, hunting, and obedience training. Even today these dogs are energetic, intelligent, and strong-willed. Generally Miniature Schnauzers weigh between 11 and 20 pounds with an average lifespan of 12 to 14 years. Because of their size, these dogs are great for apartments or larger farms. They are very protective of their families and will sound the alarm when burglars, visitors, and other animals come to call. Also, because they learn so quickly they are great at performing tricks.

However, their stubborn streak is something you may have to deal with. Miniature Schnauzers require strong and consistent leadership they can respect.

Westies are small and sturdy terriers with a white coat and a black nose.

Their deep-set, dark brown eyes have entranced many, as does their lively and friendly personalities. These dogs originated in Poltalloch, Scotland. Basically a Cairn Terrier breeder whelped the white pups in his litter to produce the all-white terriers. They are full of self esteem, intelligence, and are quick to learn from their owners. These easily trainable dogs are so affectionate and loyal, many people have chosen them as family pets. Generally the West Highland White Terriers weigh between 13 and 22 pounds with an average lifespan of 12 to 16 years. They are social dogs that get along well with everyone. They are also energetic, and will require consistent exercise so they do not resort to destructive behaviors.

They can however be left alone for longer periods of time if necessary, as long as you provide entertainment for them in the form of toys and puzzle treats.