10 Most Popular Dog Breeds in The United States 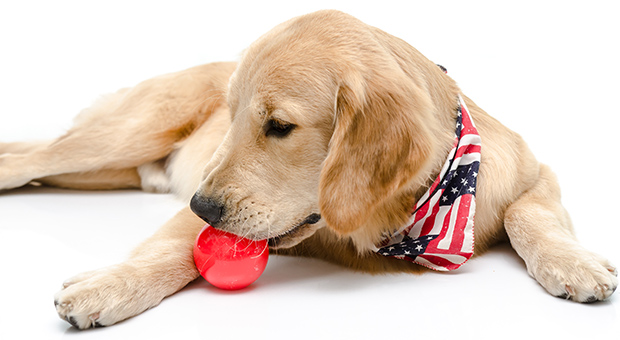 From house pet to hunting companion, dogs are some of the most versatile and varied animals who walk on four legs. Yet what makes some breeds so spectacularly popular? Is it their looks? Their talents? Their size and adaptability? Or a combination of all these characteristics? Find out more about the nation’s most popular dog breeds and see for yourself.

Every year the American Kennel Club (AKC) uses statistics from pet registrations to decide which dog breeds are the most popular in the United States. From this list there are several breeds that seem to reappear regularly. They have a longstanding love of Americans’ hearts, are lovable and useful, and highly versatile as both pet and working dog.

Though these dog breeds are varied, with a myriad of characteristics and personalities, there are some things these dogs have in common that make them so popular. Most of them are great family dogs. They love humans and children alike, and often can accept other animals as family members as well if brought up with them. These dogs are usually of a manageable size, good for apartments, houses, and farms. They are also intelligent and easy to train, making them popular choices for many dog owners across the nation.

The Most Popular Dog Breeds in The States

Labrador Retrievers are congenial and easily trainable. They have in fact been at the top of the popularity poll for 23 years in a row. No wonder! These dogs are loving, loyal, and intelligent. They are also good-natured and eager to please. They can work as service dogs or hunting dogs. They are as good with children as they are with other dogs. Seriously, when it comes to the sociable Labrador Retrievers, what is not to love? Generally Labs weigh between 60 and 75 pounds with an average lifespan of 10 to 12 years. These dogs can adapt to any circumstances as long as they get adequate exercise and attention. However, one setback to this lovable breed is they have a tendency to gain weight.

German Shepherds originally bred to be an unmatched herding dogs. They are athletic, intelligent, and highly capable. These dogs are generally reserved and aloof, but not aggressive. They are trainable and respond especially well when they have a job to do. As an exceptional working dog, they have been employed by both police and military services. They are also often used as guide dogs, herders, search and rescue dogs, and in drug detection. Generally German Shepherds weigh between 75 to 90 pounds with an average lifespan of 10 to 14 years. Fans of German Shepherds love their adaptable talents and their yearning for learning. These dogs shed, a lot, and can also suffer from separation anxiety.

These beautiful dogs have uniquely small bodies and large personalities. They are loving, loyal, and highly intelligent dogs. Yorkshire Terriers have a talent for figuring things out. These characteristics originate in their hunting ability and breeding to seek out rodents and vermin. Though they are small, they are great protectors and watchdogs. Generally Yorkies weigh between 4 to 6 pounds with an average lifespan of 12 to 15 years. Despite their watchdog status and bravado, these dogs are also sweet. The Yorkies’ soft side has them bonding quickly with their owners. They are eager to please and respond well to praise and attention. They can be easy to train, but will need consistent reinforcement and supervision early, so they don’t develop bad habits. Yorkshire Terriers are great family dogs for those with older children and will need to be with the people they love.

There are many reasons why Golden Retrievers are so popular, but one of the top is their ability to excel as both family pets and working dogs. They are friendly as well as tolerant. They are also highly trainable and intelligent. They have quite a few talents associated with their retriever status like tracking, sniffing, and hunting. They make excellent hunting companions, therapy dogs, and as assistance dogs. No wonder these dogs make up one of the most popular dog breeds. Generally Golden Retrievers weigh between 55 and 75 pounds with an average lifespan of 10 to 12 years. However, despite their athletic build and love of exercise, these dogs also love to eat. They can quickly become overweight if not properly fed and exercised. These are also boisterous dogs, and though they love children, they can bowl them over during play. Otherwise, these dogs are perfect for almost any home.

Another one of the most popular dog breeds in the United States is the English Bulldog. Not only are these dogs highly ranked among celebrities, but they are also the 3rd most popular team mascot around the nation. Originally bred in England, bulldogs date back to the 16th century, when these dogs were used for bull baiting. As such, you can imagine that these dogs were taller and heavier than they are today. Once bull baiting was outlawed it was assumed the breed would disappear. Yet, many breeders still admired the strength and stamina of the bulldog. So the bulldog was re-engineered, focusing on the gentler temperament. That is how they became the affectionate dogs we see today. Generally English Bulldogs weight between 40 to 50 pounds with an average lifespan of 8 to 12 years. These broad, low to the ground dogs are thick and sturdy. This makes them great companions for playing around in the yard with kids, but not exceptionally great swimmers.

Fun fact: the famous and fun loving Snoopy is a Beagle. The Beagle is the only breed to rank in the top ten of the AKC registry every year since its induction in 1885. These dogs are happy, companionable, and just plain cute. They have an exceptional sense of smell, the result of their breeding as a scent hound in England. They love following an interesting scent and work well in packs. They tend to wander off if they find something interesting to track, which is why you have to keep an eye on them during walks or visits to the park. Generally Beagles weigh between 18 and 30 pounds with an average lifespan of 10 to 15 years. These dogs are “chowhounds” meaning they take their kibble and their food bowl very seriously. Children should respect Beagles while they are eating and not approach them or tease them with food. Also, these are not the best guard dogs because though they may be standoffish at first, Beagles usually warm up to strangers rather quickly.

For about 10 years the Boxer has held middle ground with regard to popularity. This breed loves humans, especially children. They are the perfect combination of patient and protective, while also being sturdily built for play and exercise. This popular dog breed originated in Germany and arrived in the United States after World War I. These are striking animals with sleek, short coats in an array of colors. Generally Boxers weigh between 60 to 70 pounds with an average lifespan of 10 to 12 years. Early training is critical for most boxers, working on their manners before they become too big to handle. Many of these dogs often take their guarding duties a little too seriously. Boxers do not generally do well in hot weather, which make them a larger breed but also very much indoor dogs. They drool a lot, snore loudly, and will burrow their way right into your heart.

Rottweilers are medium to large, and usually robust. They have a powerful build that comes from their breeding to drive cattle long distances. They also were used as intimidating guard dogs because of their stature. For these reasons Rottweilers are still one of the most popular dog breeds. They are bold, alert, and self-assured. These are also obedient and intelligent dogs. Though not exactly friendly with strangers, these dogs will be loving and playful with their families. Rottweilers would not be one of the top breeds if they were temperamentally unsound or inherently vicious. Despite what you may have heard, Rottweilers can be playful, sweet, and gentle if they are well bred, well socialized, and well trained from the beginning. Generally Rottweilers weigh between 85 to 130 pounds with an average lifespan of 8 to 11 years. These dogs, to become the protective yet gentle breed you are looking for, need firm and consistent discipline from a leader they can respect. Then you will have the calm, courageous, and confident dog Rottweilers are known for.

Another highly likable dog breed is the Poodle. These dogs, often misrepresented by their fashion status, are in fact very smart dogs. They are highly trainable and do well in canine sports. Poodles are also athletic and playful, not known to simply lounge the day away. These family friendly dogs are always up for a walk or a game, and will often become destructive when left alone for too long. Their mind and body both need to be engaged for these dogs to remain happy and content. So what is with the flashy coat? One of the poodles’ trademarks is their poofy, hypoallergenic coat that is often elaborately styled. This is because the dog was bred to be a water dog, and the trimming of the heavy coat would keep them afloat and prevent any snagging while they were in the water. Generally Poodles weigh between 45 to 70 pounds with an average lifespan of 12 to 15 years. They are loyal and loving dogs, but can also be mischievous. When taught young these dogs can be calm, dignified, and protective of their home and family.

Another signature and highly popular breed is the Dachshund. These little wiener dogs love to play and are often said to have the heart of a lion. Historically these dogs chased burrowing prey like rabbits. They also tracked down wild boar and foxes. They have an unyielding tenacity to succeed in any undertaking, which can be entertaining as well as frustrating. These dogs love to jump, love to bark, and love to eat. They are also cute and clever, getting their owners to do just about anything. Dachshunds generally weigh between 16 and 32 pounds with an average lifespan of 12 to 15 years. These dogs, known for their unique shape, also have large, soulful eyes and entertaining facial expressions. However, it is important to note that they often only have eyes for one person and will bond closely with them. This characteristic could result in jealous snapping if not properly trained and socialized.